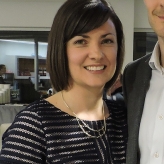 Emily trained with me before she became pregnant with her first child, so all ready had a good fitness foundation. However, unfortunately Emily's pregnancy was not plain sailing. Throughout her pegnancy Emily suffered from morning sickness. This did not stop after the first trimester so Personal Training sessions were always tailored around how she was feeling and we took every day as it came. In addition as Emily progressed through the second trimester she suffered from lower back pain and had severe diastis recti. We knew that lower back pain ran in the family, so sessions were designed around alleviating this pain and we spent a lot of time mobilising her spine to give her relief. Once the diastis recti evolved, we made sure the exercises we did supported her structure and we worked alongside a physio to make sure that she became stronger and more supported as she headed into her final weeks.

About 10 weeks after Emily had given birth and she had been signed off by the physio, we began to work together again. Emily still had 6cm of diastis recti split plus we had to be aware of a hernia that had developed toward the end of pregnancy. We went back to the basics, with the main focuses of strengthening her lower back and getting her stomach to fuse back together. Emily was very motivated and the exercises I gave her to do by herself she followed. We managed to get her to 2cm diastis recti split within 3 months, which was great as sometimes it can take a lot longer. A year down the line Emily has made a full recovery and is now training to the same intensity that she was before she fell pregnant, plus we both always get a massive smile from her little boy at the end of every session, which makes it all worth while!

"After giving birth to my first baby I suffered from stomach muscle separation (diastasis recti) of 5-6cms. This resulted in a hernia through my belly button and I needed help to lift my new baby and had difficulty walking any distance. I was using my back to compensate for the lack of stomach muscles and had severe back pain. I was also left with around an extra 2 stone in weight. I started seeing Gemma around 4 months after having my baby. A lot of the initial work focussed on rebuilding my core strength, getting the stomach muscles back together and mobilising my back. Gemma gave me exercises to do inbetween our sessions to help speed up the process and after a few weeks I started to notice a big difference. The back pain was going and I was also losing weight. Five months later (nine months after giving birth) I was back to my pre-baby weight and had only a small gap left in my stomach muscles. The back pain was completely gone and I was able to easily lift and carry my (quickly) growing baby. Without Gemma's help I have no doubt that I would still be struggling hugely."